Whoopi Goldberg says 'both sides' guilty of rhetoric like Schumer's against Kavanaugh, must 'be more careful'

"The View" co-host Whoopi Goldberg said Thursday that "both sides" were guilty of rhetoric similar to Sen. Chuck Schumer's, D-NY., about Supreme Court Justices Brett Kavanaugh and Neil Gorsuch in 2020.

Goldberg noted that Schumer apologized for saying that the justices "will pay the price" and that he shouldn't have used those exact words, adding that they would face political consequences.

"In this climate, don't we all have to like, take a beat and really pay attention from both sides? Because we both are guilty of it. Both sides are guilty of doing this, of speaking and then some crazy stuff happens and you're reminded that there is folks out there who are, you know, who are listening to what you say. There are consequences to what you say and you should be more careful," Goldberg said. 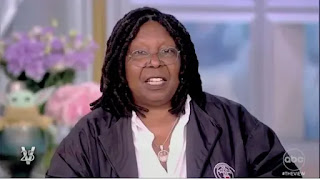 Co-host Joy Behar pivoted to Senate Minority Leader Mitch McConnell and criticized him for demanding that the House pass security protection for the Supreme Court justices.

McConnell slammed the House for blocking the security bill on Wednesday.

Behar claimed that McConnell was worried about security for members of the high court and not about passing legislation in response to the shootings in Buffalo, New York and Uvalde, Texas.

"We should condemn and not condone any violence against any public official whether we agree with them or not, and it should not just be the Supreme Court. There's also federal judges. There was one in New Jersey, Judge Salas, whose son got killed," guest host Ana Navarro said.

Co-host Sunny Hostin interrupted and noted that Justice Sotoymayor was "threatened" after Judge Ester Salas' son was killed during an armed attack on their home in 2020 by a disgruntled attorney. "You didn't hear Mitch McConnell wanting to pass any legislation then," she said.

Referring to Kavanaugh's would-be murderer, Hostin declared that "the reason that he showed up to Justice Kavanaugh’s home is he was upset about the leak, the Supreme Court opinion’s leak. Not about what Schumer said two years ago." She then slammed McConnell for "politicizing" the incident.

Behar said that they have to "pull something out of their behinds." Navarro added that "nobody" pays attention to what Schumer "said two days ago."

An armed man was arrested near Kavanaugh's house in Maryland on Wednesday. He was carrying a knife, pepper spray and a gun. The would-be assailant made violent threats against Kavanaugh, according to the criminal complaint.

The suspect told police that "he was upset about the leak of a recent Supreme Court draft decision regarding the right to an abortion as well as the recent school shooting in Uvalde, Texas," and said he thought Kavanaugh "would side with Second Amendment decisions that would loosen gun control laws."