Showing posts with the label Stephen Colbert
Show all

Since CNN isn’t allowing their anchors to drink during their New Year’s Eve coverage, Stephen Colbert and Don Lemon decided to celebrate early. 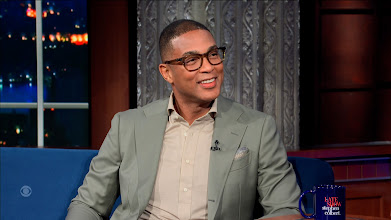 On Monday, "The Late Show" host  Stephen Colbert  asked Lemon about Licht, who previously served as the executive producer of the CBS late-night program before being tapped as CNN's CEO following the ousting of Jeff Zucker earlier this year.  "Word on the street is that you guys aren't allowed to be liberal anymore. Is that the case?" Colbert asked.  "I don't think we ever were liberal," Lemon responded.  "What?" Colbert shockingly reacted. "That's not me saying that, that's the people out there saying he's not letting you be liberal anymore." "Well listen, I think what Chris is saying is that he wants Republicans – sensible Republicans, he wants us to hold people to account, but he wants people to come on and feel comfortable with coming on and talking on CNN and appearing on CNN," Lemon said. "So if you invite someone to your house, you want to make them comfortable but also by the nature of what
Post a Comment
Read more
More posts