Ana Navarro loses it during CNN gun control panel: 'Get your a--es in gear and call your Senators!'

After Goldberg cited accurate school shooting statistics and asserted that we shouldn’t be trying to "paralyze" American parents "with fear" over their children’s safety, Navarro yelled at the conservative commentator and accused him of turning children’s deaths into a "statistic."

She then urged viewers to get their "a—es in gear" and "call your senators" so that they can change gun laws.

The volatile segment began when CNN Tonight host Laura Coates addressed Goldberg and his reactions to actor Matthew McConaughey’s  White House speech pushing for gun control. She remarked to the panelist, "You pushed back a little bit," before letting him explain himself. 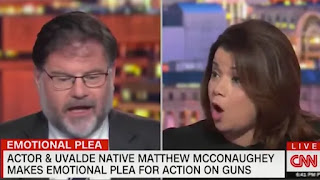 Goldberg admitted he agreed with "Everything [McConaughey] said" but clarified, "if we’re going to start telling people that they should be scared that this could happen to them, we should at least put some of this in perspective." Goldberg then delivered a controversial statistic, "There are about 54 million kids who go to K-12 in America. In the last 29 years, 170 kids have been killed in school shootings."

He provided one more point so that his fellow panelists might understand. "If we’re going to tell people they should be terrified about their kids being dropped off at school, we should remind them their kids are more in danger on the drive to school, statistically, than they are at the school."

Navarro, a frequent co-host on ABC's The View, lost her patience by this point. She interjected, "No, no, no … Jonah, we can’t do this." She then declared, "A child’s life cannot be a statistic. You can’t tell the parents of Joaquin Oliver of Parkland, you can’t tell Fred Guttenberg, you can’t tell my cousin —."

Goldberg argued, "But that’s moral bullying. I’m making a basic point to say that you shouldn’t tell people that they should be terrified."

Navarro shot back, "If it were your child, it would not be a statistic. It would be a tragedy you would never, ever recover from." Goldberg replied, "You’re making it sound as if I don’t have compassion for these people. Of course I do!"

After the increasingly tense conversation moved to "car seat laws" and Navarro’s point that the government regulates driving to save children’s lives, she loudly insisted the U.S. government does nothing to save school kids from shootings.

Navarro exclaimed, "This is one of the only places where not doing anything has become status quo and something as a country we accept. And Shame on us for accepting that!" Navarro has made the same point in other media appearances.

She then yelled at Goldberg, "And I’m not morally bullying you. I’ve children I care about. And you do, too!"

Goldberg protested once more about not overblowing fears of "random madmen shooting up schools." Navarro was having none of it. "You’re making this into a statistic conversation, instead of about the fact there’s children being buried in coffins adorned with Superman decals!"

Still Goldberg pushed back, saying, "But if you’re going to take that moral outrage and then tell people they should be paralyzed with fear this is going to happen to them and their kids, you are doing them a disservice."

She then concluded her tirade with a demand that Americans get after lawmakers to change gun laws. "It’s enough of that. No more paralysis. Get you’re a--es in gear and call your senators," she yelled.