Showing posts with the label Julian Castro
Show all

- March 10, 2019
Julián Castro said the US should address its "original sin of slavery" and pledged if elected president to "appoint a commission or task force to determine the best way to do that." Whatever you think of the policy of reparations it’s clear that Castro is subtly trying to insinuate that Bernie is racist here, which is one of the main points of attack from the anti-Bernie crowd. I can’t wait to enjoy the Bernie Bro misogynist attacks on Castro on social media!! One final thought – his last statement in the video really undermines his entire argument. He says that if the government pays back citizens when it takes their property, shouldn’t they also pay back who themselves  were  property. But that’s the biggest problem here, right? It is very very difficult to decipher who exactly descended from slaves, and that money isn’t going to the person who suffered slavery directly, but their descendants. So his statement is only persuasive if you don’t stop and think
Post a Comment
Read more

Julian Castro answer is fantastically stupid: Trump's Wall Would Replace Statue Of Liberty As The Symbol Of America 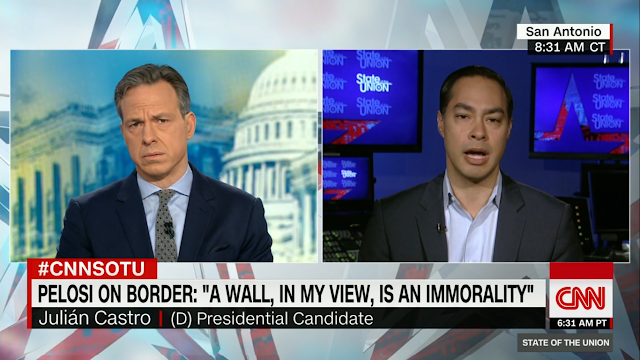 2020 Democratic Presidential candidate Julian Castro discusses the border wall and the shutdown deal, how he plans to pay for his policies, and Howard Schultz's potential independent run for President. And, he  has one of the most fantastically stupid answers to Jake Tapper’s questioning that it is going to be really really hard to write this without cursing. CNN, JAKE TAPPER: Right. Earlier this month, Speaker of the House Pelosi said that the wall was -- quote -- "immoral." As you know, as you just stated, there are roughly 650 miles of existing wall, barrier, fencing at the border. Are they immoral? JULIAN CASTRO: Well, I don't think it represents the best of what America stands for. I think -- I believe that if we were to build the kind of wall that Donald Trump is talking about -- and, admittedly, as you know, sometimes, that's hard to figure out, because, some days, he says it's a beautiful big concrete wall, and, other days, he says it&#
Post a Comment
Read more
More posts