Showing posts with the label Annie Donaldson
Show all 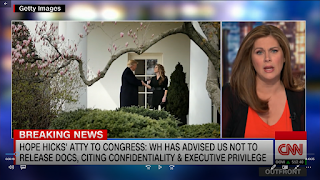 Former Trump administration officials Hope Hicks and Ann Donaldson both defied congressional subpoenas for documents from their time in the White House, citing executive privilege. But committee Chairman Jerry Nadler is not giving up his fight for the documents. It was breaking news just before lunch that the White House had advised Hope Hicks not to turn over documents to Congress despite a subpoena. But it appears Hicks has agreed to turn over at least some documents relating to the 2016 campaign: REUTERS  – Former White House Communications Director Hope Hicks, once a close aide to President Donald Trump, has agreed to turn over documents related to his 2016 campaign to congressional investigators, a key lawmaker said on Tuesday. The agreement marks a step forward for the House Judiciary Committee in its probes of Trump and his inner circle, with Democrats in the U.S. Congress digging into the campaign, Trump’s turbulent presidency and his business interests. She and fo
Post a Comment
Read more
More posts