Showing posts with the label Elaine Bredehoft
Show all 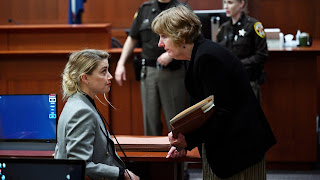 Attorney Elaine Bredehoft sounded off on "CBS Mornings" and NBC's "TODAY" show Thursday, one day after the defamation trial between actor Johnny Depp and actress Amber Heard concluded, and turned the verdict into a message about women and domestic abuse accusations going forward. In her CBS appearance, Heard's attorney described Depp's win as a "major setback for women," citing the actress's "enormous amount of evidence" and telling hosts Gayle King, Tony Dukoupil and Nate Burleson that a lot of that evidence was "suppressed." "Look at all the women who have no evidence," Bredehoft said, adding, "Basically, what this jury said is unless you pull out your cell phone, and you tape record your spouse beating you, you’re out of luck." The attorney also took to both channels to discuss the sway social media had on the jury's decision, telling NBC's "TODAY" show that the jurors
Post a Comment
Read more
More posts