Showing posts with the label Wolf Blitzer
Show all 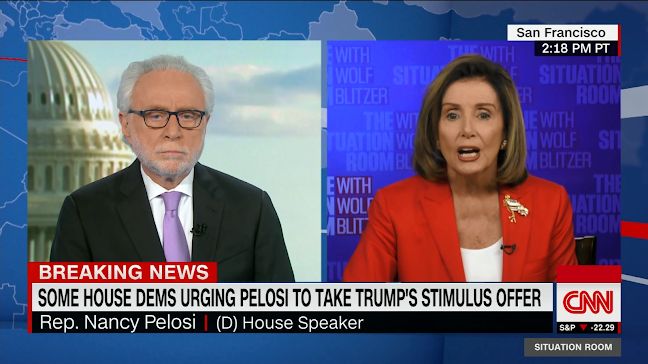 The contentious exchange continued when Blitzer pressed Pelosi again about Trump's $1.8 trillion proposal, asking her, "why not work out a deal with him and don't let the perfect, as they say here in Washington, be the enemy of the good?" "Well, I will not let the wrong be the enemy of the right," Pelosi fired back. "What's wrong with $1.8 trillion?" Blitzer asked.  "You know what, do you have any idea what the difference is between the spending that they have in their bill and what we have in our bill?" Pelosi asked before ticking off a list of her issues with the proposal. "That is precisely why, Madame Speaker ... it's so important right now," Blitzer responded "Yesterday, I spoke to [former Democratic presidential candidate] Andrew Yang, who says the same thing. It's not everything you want but there's a lot there." "But you know what? Honest to God!" Pelosi complained. "You really-
Post a Comment
Read more