Showing posts with the label John Hickenlooper
Show all

Dem candidate declines capitalist label; why it matters - Morning Joe had vote for Trump in 2020! 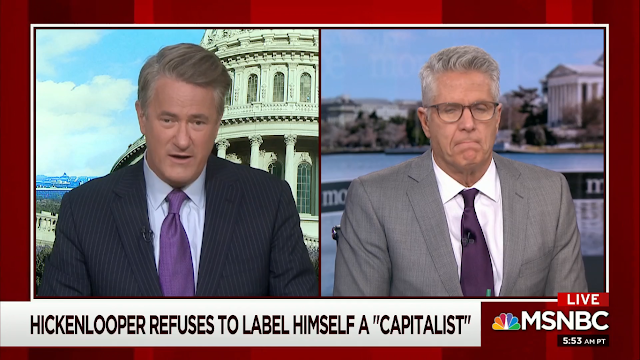 Former Gov. John Hickenlooper declined to consider himself a capitalist during his Friday Morning Joe interview. Joe Scarborough, Willie Geist and Donny Deutsch share their thoughts. watch:  As this clip begins, Joe Scarborough is actually lamenting the fact that Democrats running for president can’t even admit they are capitalists. Earlier in the day, 2020 candidate Gov. Hickenlooper couldn’t even admit to Morning Joe that he’s a proud capitalist, which led Joe to argue that the Democratic Party is in crisis if their candidates can’t even support capitalism. He suggested Trump will destroy them if the party continues down this socialistic/anti-capitalism path. Donny Deutsch completely agreed and suggested that, despite finding Trump to be a reprehensible human being, he’d still vote for him over these socialist candidates, because socialism is so dangerous! And that’s when Morning Joe quickly corrected Deutsch, telling him that there’s no way he’d ever vote for a bigot
1 comment
Read more
More posts