Showing posts with the label Rayshard Brooks
Show all 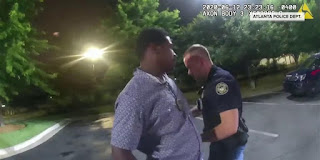 Video shows fatal officer-involved shooting in Atlanta, Video from a witness and surveillance footage show the events leading up to the deadly police shooting of 27-year-old Rayshard Brooks   at an Atlanta fast food restaurant. Mayor Keisha Lance Bottoms announced the resignation of Chief Erika Shields, a member of the Atlanta Police Department for more than two decades, and said Assistant Chief Rodney Bryant would serve as interim chief until a permanent leader was hired. "Chief Shields has offered to immediately step aside as police chief so that the city may move forward with urgency in rebuilding the trust desperately needed in our communities," Bottoms said. Shields said later that "it is time for the city to move forward." "Out of a deep and abiding love for this City and this department, I offered to step aside as police chief," she said in a statement. "I have faith in the Mayor, and it is time for the city to move forward and buil
4 comments
Read more
More posts