Showing posts with the label Marianna Sotomayor
Show all 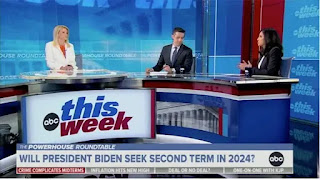 Washington Post congressional reporter Marianna Sotomayor said Sunday during ABC's "This Week" that it could be too late for Democrats on the economy as the midterms approach. Host Martha Raddatz asked the ABC panel about a New York Times report from Saturday about President Biden potentially sitting out 2024. "That's not a good headline," Raddatz said of the piece, headlined, "Should Biden Run in 2024? Democratic Whispers of ‘No’ Start to Rise." A New York Times reporter said in May that a lot of Democrats don't believe Biden will run again in 2024. ABC News political director Rick Klein said that the White House wasn't "too concerned" about it because the "whispers" weren't "shouts" and that "people aren't saying it very loudly." He noted that there was no obvious person who could step in and that not many Democrats believed Vice President Kamala Harris would be the right fit. He also said
Post a Comment
Read more
More posts