Showing posts with the label Howard Schultz
Show all

Howard Schultz: I don't believe what Elizabeth Warren stands for 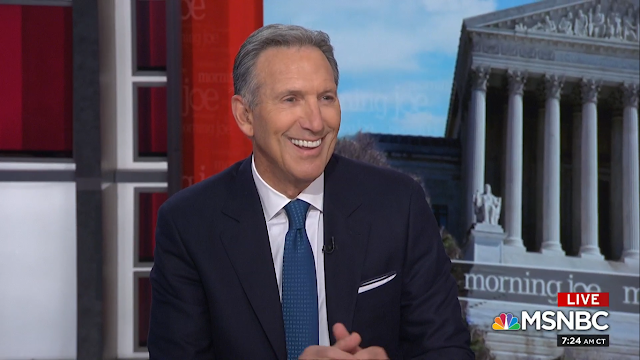 Responding to Sen. Elizabeth Warren (D-Mass.) yesterday,  Schultz wrote , “People need real opportunities to help themselves, not unrealistic policies and promises. Genuine opportunities, like the ones I had, which helped me leave the housing projects of Brooklyn and realize my dreams.” Just this morning he criticized Elizabeth Warren for trying to take the country toward socialism: Schultz said that Warren came to him for a contribution a few years ago for her Senate race. When asked if he gave her one, he said “I did not”. This shocked the listening ears of the hosts, who asked him why. “I don’t believe what Elizabeth Warren stands for. I don’t believe the country should be heading toward socialism.” BOOM! I love it! See Also:   John Bolton seen holding notepad with words '5000 troops to Colombia' Even ABC News is now suggesting that Schultz is forcing Democrats into an early reckoning: The Note: Howard Schultz forces Democrats into an early reckon
Post a Comment
Read more 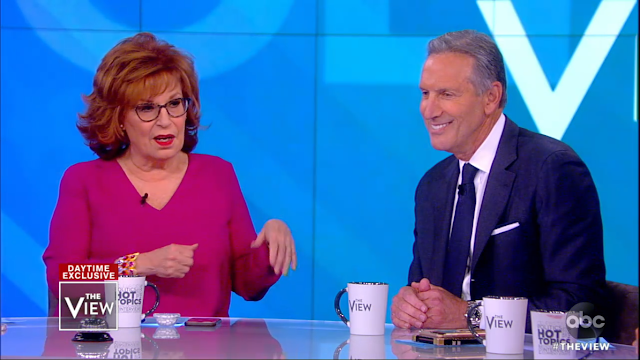 This is actually an interesting interview with  Howard Schultz  , who explains to the ladies of The View why he can’t run as a Democrat. Politics: Democrats are worrying about former Starbucks CEO Howard Schultz running as an independent for president in 2020. They say it will only help President Trump. But the only reason this lifelong Democrat is thinking about an independent bid is because the Democratic party has moved so far to the left. Watch: It’s amazing to hear Schultz explain to these ladies why the policies espoused by Kamala Harris last night are just nuts. He said to get rid of the insurance industry would kill millions of jobs, just to replace it with a government run health care system that we can’t pay for. See also:   Sarah Sanders: Trump opened government because Dems 'signaled' they're willing to make border deal Schultz explains to them that the reason he’s running as an independent is because he’d be a hypocrite if he ran as a Democrat.
Post a Comment
Read more
More posts