Showing posts with the label Whitney Wild
Show all

CNN correspondent Whitney Wild downplayed the violent threat against Justice Brett Kavanaugh's life and warned about political violence from both sides, after an armed man was arrested outside the justice's home, Wednesday. 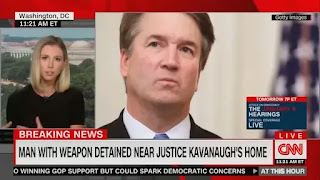 CNN's law enforcement correspondent downplayed a violent threat against Supreme Court Justice Brett Kavanaugh after an armed California man was arrested outside Kavanaugh's home in Maryland, early Wednesday morning. Whitney Wild’s initial report on CNN at 11 am EST wondered if the man "had a weapon at all," and did not disclose the violent threat. Law enforcement officials and other networks were already reporting the man was armed with a knife and a gun and admitted to wanting to harm or kill the Supreme Court Justice. "We don't yet know what the nature of the threat was. We don't know what language the threat was or what kind of weapon this man might have had, if he had one at all, because the information at this point is just so thin," Wild began, while the chyron below her read, "Man with weapon detained near Justice Kavanaugh's home."
Post a Comment
Read more
More posts