Showing posts with the label Gina Raimondo
Show all

President Joe Biden's administration is considering a drawdown of tariffs on Chinese goods in an effort to combat record-high inflation in the U.S. Commerce Secretary Gina Raimondo confirmed the potential move on Sunday, saying Biden has personally asked her team to look into the issue. Inflation in the U.S. hit a 40-year high in March and is expected to escalate in the coming months. Some of the tariffs, imposed by former President Donald Trump, affect household goods that could be purchased more cheaply from China. Raimondo previously praised some of Trump's tariffs on China as "very effective."   "We are looking at it. In fact, the president has asked us on his team to analyze that. And so we are in the process of doing that for him and he will have to make that decision," Raimondo told CNN in an interview when asked about the issue. Link 1 Link 2 Link
Post a Comment
Read more 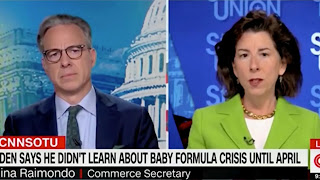 Secretary of Commerce Gina Raimondo was pressed on CNN Sunday about the Biden administration looking "flat-footed" in its response to inflation and the baby formula shortage, at one point citing France's higher gas prices as a defense of White House policies. Raimondo blamed inflation and high gas prices on the war in Ukraine and supply chain issues during the pandemic after "State of the Union" host Jake Tapper pointed to her comments from July. She said that inflation would be temporary and a short-term problem, but it's bedeviled President Biden and the nation for months.  "So you got it wrong, too," Tapper said.  "So, clearly we are and Americans are struggling with inflation. But I don’t think anyone predicted Putin’s war in Ukraine or various other things that have happened that have been unexpected. I still think we will get inflation under control. We just have to stick with it and see it through," Raimondo told Tappe
Post a Comment
Read more
More posts