"The View" co-host Joy Behar said Wednesday that gun laws would change "once Black people get guns in this country."

"The View" co-host Joy Behar said Wednesday that gun laws will change in the U.S. "once Black people get guns," while discussing congressional action on gun control legislation.

Guest host Lindsey Granger argued that people on both sides of the political aisle need to sit down, debate and find common ground on issues such as gun control and terrorism and "make real progress."

Co-host Sara Haines reiterated the discussion the hosts had with Sen. Chris Murphy, D-Conn., on Tuesday. Murphy said that getting gun control legislation passed in Congress is going to require a give-and-take between Republicans and Democrats.

Behar said that members of the Republican Party have said that "taking those AR-15s off the market" was a nonstarter for them. "It's all about the guns, alright," Behar continued.

"Let me give you a story," Granger said. She described a man in Connecticut that witnessed a home invasion at his neighbors house.

She said that the man built his own AR-15 because the state of Connecticut doesn't allow you to buy them, but that you could abide by their rules to build them. "He has one in his house to protect his family because he never wants to see that happen again. He is a Black man, it's odd, most AR-15 owners are former military, 35-plus and married," she said. "They're not just crazy people." 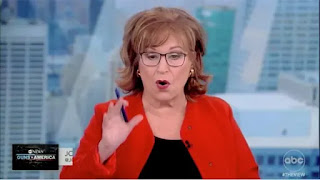 Behar interrupted and said, "here's the thing, once Black people get guns in this country, the gun laws will change. Trust me."

Granger said that Black people have been buying guns and that Black gun ownership increased in 2020.

"Here's the bottom line to this," co-host Whoopi Goldberg said. "We all need to get off our a---- and get out and vote."

Goldberg said during "The View" last week that she "doesn't want" all of the guns, but emphasized that she wants to ban AR-15s.

Haines asked Murphy on Tuesday if the Republican Party was going further right amid Rep. Chris Jacobs', R-NY., announcement that he would be dropping out of his reelection campaign after being criticized for supporting an assault weapons ban.

See also: MATTHEW McCONAUGHEY MAKES PLEA FOR GUN REFORM: After the Uvalde, Texas native made a passionate plea for gun reform at Tuesday’s White House press briefing, #TheView panel reacts and questions if speaking out will change the minds of Americans.
Joy Behar The View