Showing posts with the label LaTosha Brown
Show all

Looking to hear from our Co-Founders, LaTosha Brown and Cliff Albright, on the GA runoff election, power of the Black vote, and more? 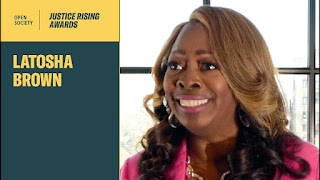 The Georgia U.S. Senate runoff between Herschel Walker and Raphael Warnock is analyzed by voting rights and politics experts live on the ground in Atlanta on the eve of the official voting day. “In Georgia we have critical needs,” voting rights activist LaTosha Brown tells Joy Reid. “I think the people of Georgia are saying… this is the time to really make sure we have representation… that is going to fight for the people of Georgia." During Monday night’s episode of MSNBC’s "The ReidOut," the anchor spoke to Brown and MSNBC contributor Jason Johnson about the state of the race the evening before election day. The conversation turned toward how Walker’s GOP allies, namely Sen. Lindsey Graham, R-S.C., have appeared to prop up the candidate in a way that’s been "insulting" to Black Americans. Brown began, "Black people are upset, actually they feel insulted." She explained, "They feel insulted that here the Republicans would actually pick a ca
Post a Comment
Read more
More posts