Showing posts with the label Jim Jordan
Show all

Here we goooo.. Inbox: Jordan and Meadows Refer Michael Cohen to the Justice Department for Perjury 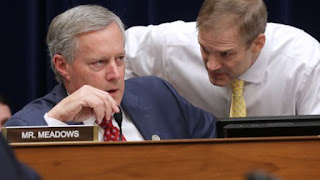 UNBELIEVABLE: CNN says Michael Cohen has already LIED under oath about NOT wanting to work in the White House!

“Shame on you Mr. Jordan, that’s not what I said,” he said to Jordan. The exchange came after Cohen, who was testifying on Capitol Hill, was grilled by Rep. James Comer, R-Ky., about the charges of bank fraud that were part of the financial crimes to which he pled guilty in August. Cohen said he took exception with Comer’s statements because “I never defrauded any bank” although he admitted wrongdoing at the same time. See also :   Michael Cohen Says "President Trump is a racist, conman and cheat" “Surely you knew you were breaking the law?” Comer asked. “Sir I’m not a [certified public accountant], I pled guilty,” he responded. “I pled guilty and I am going to be doing the time, I have caused tremendous pain to my family.” I’ve got more videos for you from Jim Jordan this morning and they are both on fire  . See Also:  Michael Cohen: "I have done bad things, but I am not a bad man. I have fixed things, but I an no longer your fixer, Mr. Trump&qu
Post a Comment
Read more
More posts