Showing posts with the label The ReidOut
Show all

Texas Rep Jasmine Crockett blamed Republicans for shooting: 'The blood of these children' is on their hands 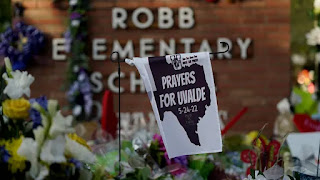 Rep. Jasmine Crockett, D-Texas, attacked Texas Republicans as being responsible for the deadly school shooting in Uvalde that killed 19 children and two adults in May, saying they had blood on their hands. While appearing on MSNBC’s "The ReidOut" on Wednesday, Crockett condemned her state’s governor and other Texas Republicans as culpable for refusing to pass gun control. "Listen, I think where you’re going wrong is you’re looking for some logic to come up out of Greg Abbott. We have seen over and over and over, I mean in, your intro, what did you talk about? You talked about the things that they called special sessions," Crockett said. "You talked about their priorities, and listen, let me be clear. I don’t want anybody to have any questions. The blood of these children is on the hands of the Republicans in the state of Texas period. No question about it because let’s talk about who has been in control in the state of Texas for at least the last 3
Post a Comment
Read more

Democrat advisor Kurt Bardella: "The Republican Party has made a conscious decision... that the lives that are lost by guns in America don't matter to them."

Democrat advisor Kurt Bardella claimed that Republicans swiftly passed the Patriot Act of 2001 only after a minority committed a crime. Appearing on MSNBC’s "The ReidOut" Thursday, Bardella called out what he saw as reprehensible behavior by Republicans who oppose new gun control measures following the mass shooting at Uvlade, Texas. While criticizing conservatives, he claimed that Republicans only pass swift measures after minorities commit crimes and cited the Patriot Act as one of them.  "We’re at a point here where, how many lives need to be lost? What’s the threshold for the pro-life party to finally decide that enough is enough. It’s interesting that when anyone that has a dark shade of skin commits a crime Republicans are willing to move at warp speed to do anything whether it’s build a wall, pass the Patriot Act, they’re willing to go to extreme measures anytime someone with a darker shade of skin commits a crime. But God forbid another gun crime ha
Post a Comment
Read more
More posts