Showing posts with the label Bill Weld
Show all

Republican Governor who worked to impeach Nixon challenging Trump for the presidency.

Former Massachusetts Governor Bill Weld talks with Lawrence O'Donnell about his work on impeaching Richard Nixon and how it shapes his view of what's in the Mueller report as he prepares to challenge Trump for the GOP presidential nomination.   As you all know former Massachusetts Governor Bill Weld has announced he’s running against Trump in the 2020 Republican primary. Well another name has now emerged as a possible contender for the Republican nomination: CBS NEWS  – Maryland Gov. Larry Hogan said he’s seriously “considering” running against President Donald Trump in the 2020 primary while he spoke in front of an audience in New Hampshire Tuesday morning. But, Hogan said he isn’t about to “launch some sort of a suicide mission.” The 62-year-old was the featured speaker at Politics & Eggs at St. Anselm College. Hogan said he needs to see a “path to victory” before he mounts a primary challenge. But the governor did say he has been strongly encouraged to r
Post a Comment
Read more 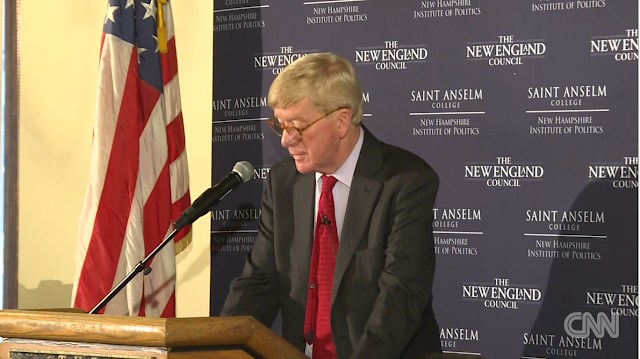 Former Massachusetts Governor  Bill Weld  is the featured speaker at the latest installment of "Politics & Eggs." The former GOP governor has launched a committee to explore a 2020 Republican primary challenge against President Trump. “I am establishing an exploratory committee to pursue the possibility of my running for the presidency of the United States as a Republican in the 2020 election. I encourage those of you who are watching the current administration nervously but saying nothing to stand up and speak out,” Weld declared to the audience and a large gathering of local and national reporters. CNN  – Former Massachusetts Gov. Bill Weld said he’s launching a presidential exploratory committee to run in 2020 as a Republican. “I hope to see the Republican Party assume once again the mantle of being the party of Lincoln. It upsets me that our energies as a society are being sapped by the President’s culture of divisiveness in Washington,” he said Friday in
Post a Comment
Read more
More posts