Showing posts with the label Tim Cook
Show all

At a recent round table meeting of business executives, & long after formally introducing Tim Cook of Apple, I quickly referred to Tim + Apple as Tim/Apple as an easy way to save time & words. The Fake News was disparagingly all over this, & it became yet another bad Trump story! — Donald J. Trump (@realDonaldTrump)
Post a Comment
Read more 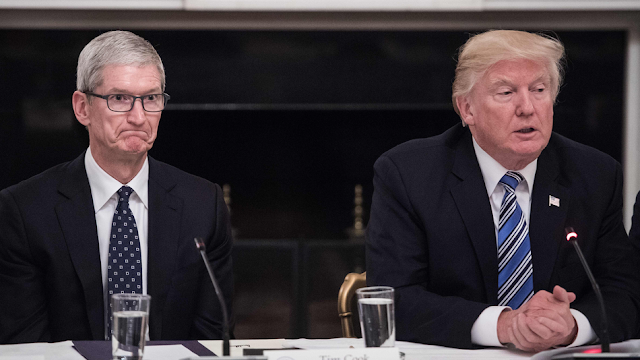 Trouble he will find you no matter where you go, oh oh No matter if you're fast no matter if you're slow, oh oh The eye of the storm or the cry in the mourn, oh oh You're fine for a while but you start to lose control President Donald Trump made his first comments on Apple’s big stock drop this Friday — and they were largely dismissive. At the news conference, Trump also voiced his displeasure with Apple for making products in China, although he falsely asserted Apple CEO Tim Cook would soon change that. TRUMP: "Don't forget. Apple makes their products in China. I told Tim Cook, a friend of mine, make your product in the US. Build those big, beautiful plants that go on for miles. Build those plants in the US. I like that even better...China is the biggest beneficiary of Apple." pic.twitter.com/tNK6OZVeDo — Aaron Rupar (@atrupar) January 4, 2019 At the White House news conference, Trump was asked whether he was concerned about Apple’s plu
Post a Comment
Read more
More posts