Joy Behar said on "The View" on Monday that inflation and high gas prices were a "worldwide problem" and largely blamed the baby formula shortage on Republicans.

"The View" host Joy Behar said Monday that all Republicans "really care about" is making President Biden look bad during a conversation about the baby formula shortage, adding that inflation and high gas prices were not on him.

"In May, 192 Republicans voted against easing the baby formula shortage with $28 million in emergency spending. Only 12 voted with the Dems," Goldberg said, adding that former President Donald Trump "made sure we can’t get baby formula from Canada because the trade rules that he put in, in the U.S./Mexico/Canada agreement punished Canadian companies if they export too much baby formula here."

Goldberg also said, "thank God" that they closed the Abbott plant after recalling several types of formula, which were linked to illnesses in infants. She slammed the "monopoly" the plant had over the baby formula market and said that Republicans "could have stopped this from happening."

Behar said that Republicans were voting against "the best interests of their constituencies" and that all they care about is making Biden look bad.

"That seems to be their M.O.," Behar said. "What do they say? Let's do something to the Libs, own the Libs and make Biden look bad." 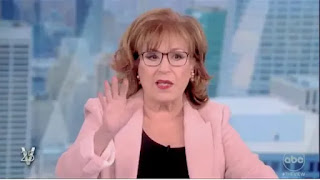 Guest host Lindsey Granger noted that she is a mom to a baby and that her daughter drinks formula.

"I think that parents are just frustrated by anything partisan having to do with this, because I want to know how to feed my kid," Granger said. "And I just am asking for some guidance from the FDA and President Biden who knew that was pandemic was happening, knew there were short of supplies and knew that parents were stockpiling, then knew that Abbott closed down. The FDA found out that Abbott was going to have issues in the whistleblower complaint in October. They went to go talk to that whistleblower in December and then checked the place in February. That's four months that lapsed in communication. People just want some guidance. People don’t want to hear about politics in this regard. They want to know how to move forward."

Abbott's plant in Sturgis, Michigan, reopened on Saturday and restarted production. The company said they would start by making EleCare and other special formulas first, and they hope to get their products in stores by the end of June.