Showing posts with the label Michael Bloomberg
Show all 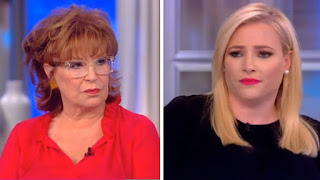 Whoopi Goldberg  and  Joy Behar  attempted to defend former New York City Mayor and Democratic presidential candidate  Michael Bloomberg  by pointing to past statements from President Trump. During Tuesday's show, Goldberg said she couldn't get upset about Bloomberg's or other candidates' comments until Trump apologizes for what he said on the infamous "Access Hollywood" tape. "Everybody has stepped in it," she said, referring to Trump's and Bloomberg's previous statements. "And so, I guess I can't get freaked out until somebody apologizes for the [grab them by the p---y comment]," she said, as ABC bleeped her words. "Once you apologize for that, then I'll get mad about everything else, but I want everybody to stop eating each other," Goldberg added, before suggesting the reaction to Bloomberg was excessive. During a PBS interview in 2011, Bloomberg cited an "enormous cohort of black and Latino ma
Post a Comment
Read more
More posts