Showing posts with the label Tommy Christopher
Show all 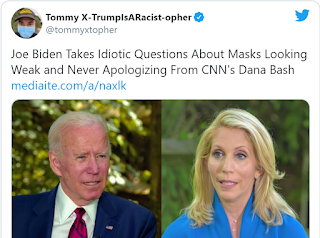 Mediaite’s Tommy Christopher is an outspoken liberal who even notes his political leanings and hatred of President Trump in his Twitter bio – but Christopher didn’t approve of Bash’s interview, either. “The most infuriating, yet encouraging, parts of the interview were when Biden was not just asked extremely stupid questions, but was then pressed on those extremely stupid questions,” Christopher wrote. “The first of these was related to Trump’s mockery of Biden for wearing a mask in public on Memorial Day… there are a lot of ways for a journalist to approach this issue.” Christopher then wrote that Bash could have noted that Trump’s comments contradict his own experts, or simply asked for a response and let Biden go to town. “But Bash went with ‘He’s trying to belittle you for wearing a mask, making it seem like it’s a sign of weakness. Is it?’ Christopher noted. “Now, some people might defend this by saying these journalists are just asking the question, maybe acting as st
Post a Comment
Read more
More posts