Showing posts with the label Fox News
Show all 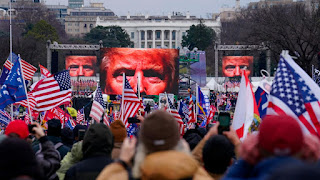 This column is about the media, and this moment exemplifies America's two parallel tracks of media. So if you watched Thursday night's hearing by the House's 1/6 committee, shown live by most of the major TV networks in the United States, let me tell you what I watched on right-wing TV at the same time. The prime-time hearing began at 8 p.m. Eastern time. When Rep. Bennie Thompson gaveled the hearing to order, Fox News host Tucker Carlson ignored him. Carlson declared that the "ruling class" was giving "yet another lecture about January 6." He called the hearing "propaganda" and reveled in his refusal to air it. "They are lying," he said, "and we are not going to help them do it." Carlson then lied himself: He said "if something noteworthy happens" at the hearing, "obviously we will bring it to you immediately." But his show did not do that. When Thompson said January 6 was "the culmi
Post a Comment
Read more

"The View"  co-hosts accused a  St. Louis, Missouri , couple of overreacting by brandishing firearms when a group of protesters trespassed on their property. The incident occurred on Sunday, when protesters allegedly broke the fence leading to Mark and Patricia McCloskey's property. Footage of the encounter went viral with both pointing their guns at the protesters. "No. 1: if I were protesters, I would not appreciate having an AR-15 headed my way or a woman who seems crazed with her finger on the trigger," co-host  Joy Behar  said. "I would not enjoy that at all. I don't think any of these protesters had weapons." "The only other thing I wanted to say was that they claim that they are Black Lives Matter supporters. In that case, why not go out to these protesters and say 'I appreciate that you're protesting, I agree with you'? Acknowledge what they're doing and ... and basically sort of neutralize the possibility of
Post a Comment
Read more
More posts