Showing posts with the label Seth Meyers
Show all

Meghan McCain swipes Seth Meyers for 'sucking up' to Gov. Whitmer, warns conservative women not to appear on his show 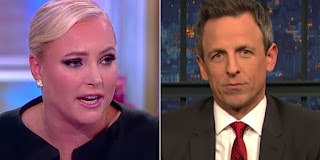 "The View" co-host  Meghan McCain  knocked "Late Night" host Seth Meyers over a friendly interview he had with Democratic Michigan Gov. Gretchen Whitmer. During the virtual sit-down on Monday, Meyers discussed the heated stay-at-home battle Whitmer has faced against protesters in her state but also discussed her potentially being Joe Biden's running mate, her thoughts on the the "Saturday Night Live" impersonation she recently received, and her newly-installed punching bag she has been using and whether or not she ever "rotate names." After seeing an article shared by NewsBusters, which claimed that Meyers had "sucked up" to Whitmer during the interview, McCain offered a warning to other conservative women who may get invited to appear on "Late Night." "Caveat emptor for ANY conservative or right leaning woman naive enough to go on his show. Trust me on this one," McCain wrote. McCain, perhaps subtly,
Post a Comment
Read more
More posts