Showing posts with the label Peter Alexander
Show all 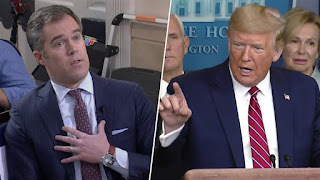 President Trump's  re-election campaign seemed to try and pre-empt any questions from NBC reporter Peter Alexander, who received intense criticism from the president during the prior day's  coronavirus  briefing. "NBC's Peter Alexander is Dishonest. The Full Video Proves It," an email headline from the campaign read on Saturday. The email, which came just before Saturday's briefing, claimed Alexander was spewing "pure, dishonest garbage," when he said his question was merely intended as an opportunity for Trump to reassure Americans. The spat started when Alexander asked Trump if his “impulse to put a positive spin on things” could be giving Americans a “false sense of hope” amid the pandemic. The president explained he had a “good feeling” about possible solutions the FDA is working on. “Let’s see what happens, we have nothing to lose,” Trump said. Alexander interrupted the next reporter who was called on, shouting, “What do you say to Amer
Post a Comment
Read more
More posts