Showing posts with the label Lawrence O’Donnell
Show all

Klobuchar withdraws from Biden VP contention: "I think this is a moment to put a woman of color on the ticket" 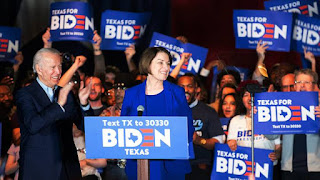 Sen. Amy Klobuchar says a woman of color should be the one to serve alongside Joe Biden as vice president, and so she is withdrawing herself from consideration. She talks to Lawrence O’Donnell about her decision,  saying she believes “this is a moment to put a woman of color on that ticket." Biden pledged earlier this year to pick a woman to be his running mate and is currently considering about a half dozen candidates, including several women of color. “After what I’ve seen in my state and what I’ve seen across the country, this is a historic moment and America must seize on this moment,” she  said . “There are so many incredibly qualified women. But if you want to heal this nation right now -- my party, yes, but our nation -- this sure is a hell of a way to do it. And that’s just what I think after being through this in my state." The police custody death of  George Floyd  last month, a black man who died after a white officer kneeled on his neck for nearly nine m
Post a Comment
Read more
More posts