Showing posts with the label Jerrold Nadler
Show all

Jerrold Nadler calls President Trump's declaration of a national emergency over border wall funding a "tremendous shift of power from Congress to the president." 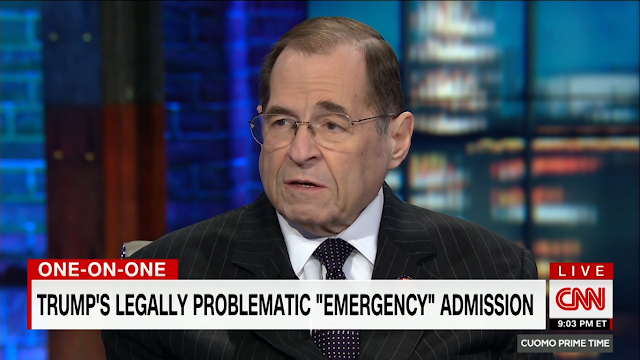 I don’t know how much want to believe this guy, but Rep. Nadler, a Democrat, says that he thinks there might be enough Republicans to vote down Trump’s declaration of national emergency. See Also:   Beto O’Rourke saying "walls do not save lives. Walls end lives" because it forces people who are illegally crossing to go to more remote places on the border. He says some are “terrified” about it: Nadler makes an argument some Republicans have made, which is that taking this action allows Democrats to do the same when they get into power. That is exactly what happened with Harry Reid and the nuclear option when Republicans took over. Nadler points out that Dems could declare a national emergency on guns and just ban all guns or force everyone to register their guns without any congressional approval. He makes a good point. For a Democrat. See Also:   Bob Menendez suggests that illegal aliens who have been convicted on DUI charges should not be thought of as crimina
Post a Comment
Read more
More posts