Showing posts with the label Andrew Napolitano
Show all 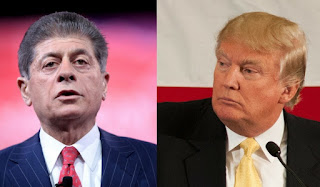 Judge Napolitano's Chambers: Judge Andrew Napolitano weighs in on Speaker of the House Nancy Pelosi decrying President Trump's national security declaration at the southern border. Another Senate Republican has come out against Trump’s national emergency and is giving the president an ultimatum to avoid a battle with the GOP: POLITICO  – Senate Republicans are offering a choice to President Donald Trump: Withdraw your national emergency declaration at the border or face a potential rebellion from the GOP. The message was delivered clearly on Thursday by Sen. Lamar Alexander (R-Tenn.), part of an effort by senior Republicans to avoid a direct confrontation with Trump on the Senate floor. In a much-anticipated floor speech, the retiring senator declined to state whether he will become the deciding vote to block the president’s maneuver. But he signaled broad opposition to the emergency declaration and sought to convince Trump that he has other ways to collect $5.7 bil
Post a Comment
Read more
More posts