Showing posts with the label Tom Steyer
Show all 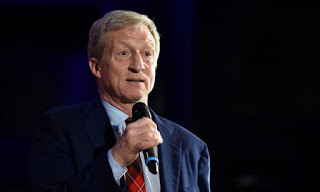 Tom Steyer , the California activist billionaire who has largely been a nonfactor in the Democratic primary campaign, dropped out of the race on Saturday night. Steyer's departure came after a disappointing finish in the South Carolina Democratic primary. With 70 percent of the vote in, Steyer had just 11.5 percent of the vote — despite spending millions of dollars on campaigning there. "There’s no question today that this campaign, we were disappointed with where we came out," Steyer told supporters in Columbia, S.C. "But I said if I didn’t see a path to winning that I'd suspend my campaign, and honestly I can't see a path where I can win the presidency." Steyer promised to remain involved in political issues across the country and said any one of the Democratic candidates for president would be better than President Trump. He also took a shot at Sen. Lindsey Graham, S.C., who represents South Carolina in the U.S. Senate. "Every De
Post a Comment
Read more

The View co-host Meghan McCain says Steyer should drop out: ‘I hate that guy — he should drop the hell out’ 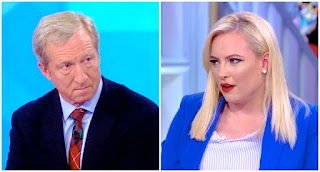 Meghan McCain  called on billionaire activist  Tom Steyer  to "drop the hell out" of the 2020 race for the Democratic nomination, declaring "I hate that guy."  McCain, the co-host of "The View," said on the program that Steyer was taking support away from former Vice President  Joe Biden  in South Carolina, and he should exit the race. “He’s really hurting Biden in South Carolina,” McCain said. “So, he’s making a dent. And he should drop the hell out. I hate that guy.” Biden still leads in the RealClearPolitics index of polls with 26.8 percent support in the Palmetto State, but Sen.  Bernie Sanders  (I-Vt.) has been closing fast and trails by only 5 points in the aggregate after being more than 20 points down in January.  Steyer is third in the index of South Carolina polls with 14.7 percent support despite not finishing higher than fifth in any of the first three contests in Iowa, New Hampshire and Nevada.   McCain, the Republican d
Post a Comment
Read more
More posts