Showing posts with the label Afghanistan
Show all

White House press sec. Jen Psaki reacts after generals testify in Senate hearing that they opposed Pres. Biden’s decision to withdraw all troops from Afghanistan: “There was a range of viewpoints...that were presented to the president…as he asks for.” 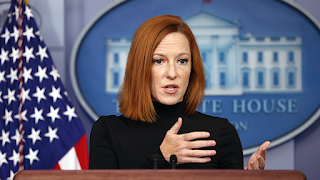 MS. PSAKI: Hi, everyone. Good afternoon. Hi. Okay. Zeke, I know this is disappointing — I have nothing at the top for you, so let’s just get into whatever you all have questions about. (Laughter.)   Q  Okay. Well, why don’t we start with testimony on Capitol Hill that’s ongoing with General Milley and General McKenzie testifying that they believe that 2,500 U.S. troops were needed to sustain the Afghan government and hold off the Taliban. The President — that just seems to be the disconnect between that and how the President described the advice from his military advisors in that ABC interview six, or so, weeks ago when he said — he denied that the Pentagon wanted troop — to continue the American troop presence there. So, did the President mislead the American public about the advice of his military advisors?   MS. PSAKI: Well, let me give you a full — a couple of specifics from the actual transcript, because I know it’s been shorthanded a bit. No malintent.   But the question asked by
Post a Comment
Read more
More posts