Showing posts with the label Jamaal Bowman
Show all

CNN's Don Lemon asks Rep. Jamaal Bowman if Democrats are "blowing it" with regard to getting anything passed as they negotiate the size and scope of President Biden's "Build Back Better" agenda. 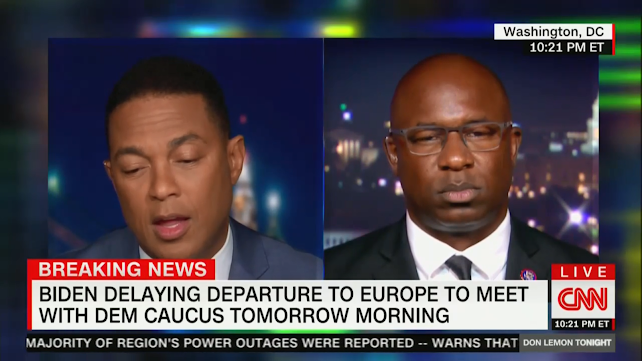 CNN’s left-wing host   Don Lemon   asked if Democrats are "blowing it" while expressing concern on Wednesday that   party infighting   will impact voters in upcoming elections and the 2022 midterms.  The low-rated host asked Rep. Jamaal Bowman, D-N.Y., if moderates like Democratic Sen. Joe Manchin, W-Va., were living in the past with their hopes that coal jobs could be saved in a modern economy. Bowman responded that the Green New Deal would help people in the fossil fuel industry maintain their jobs as "we come together to deal with the issue of climate change," noting that Hurricane Ida recently walloped New York and New Jersey. "That’s going to happen more frequently, so we have to get to a place of clean, renewable energy," Bowman said. Lemon, who didn’t appear to be listening to Bowman’s answer, instead looking down at his desk, started to ask his next question while the congressman was still speaking.  "Are you concerned that it looks like you
Post a Comment
Read more
More posts