Showing posts with the label Rod Rosenstein
Show all

Rosenstein, who was speaking in New York at the Public Servants Dinner of the Armenian Bar Association, defended his handling of the probe and criticized former officials in the process. He also called out former FBI Director James Comey for alerting Congress about the investigation into Russian collusion at the height of the 2016 presidential campaign. “The FBI disclosed classified evidence about the investigation to ranking legislators and their staffers,” he said. “Someone selectively leaked details to the news media. The FBI director [Comey] announced at a congressional hearing that there was a counterintelligence investigation that might result in criminal charges. Then the former FBI director alleged that the president pressured him to close the investigation, and the president denied that the conversation occurred. "So that happened,” he joked. The Obama administration has been criticized for its handling of the Russian interference. Trump has blamed Obama for not
Post a Comment
Read more

Meghan McCain to former deputy FBI Director Andrew McCabe: "Were you ever a leaker to the 'The New York Times'?" 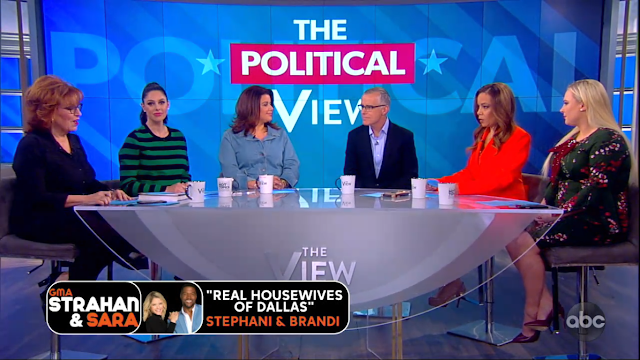 'The View' co-host Meghan McCain made former FBI director Andrew McCabe uncomfortable during an interview Tuesday when she directly asked if he was a source for The New York Times. McCabe denied the allegations and attempted to explain his side of the story saying he was unsure as to why James Comey remembered their conversations differently. Watch:    WATCH: McCabe makes DRASTICALLY different comments about Rosenstein’s coup attempt than he did on 60 Minutes! On  The View  today Andrew McCabe totally played off Rod Rosenstein’s comments back in 2017 about wearing a wire in the Oval Office and potentially invoking the 25th amendment to impeach Trump, as a ‘brief off-handed’ comment. He made it sound like Rosenstein wasn’t really serious about it. But just two days ago on 60 Minutes McCabe has something very different to say. Watch the difference. Skip ahead to the 5:30 minute mark if you’re in a hurry. For those who need a transcript, here’s what McCabe
2 comments
Read more

Vor kurzem wurde bekannt gegeben, dass die Deputy AG Rod Rosenstein voraussichtlich das DOJ verlassen wird, sobald die neue AG-Auswahl von Trump bestätigt wurde: FOX NEWS ALERT: Deputy Attorney General Rod Rosenstein to leave DOJ once new AG is confirmed  Breaking News: Rod Rosenstein, the deputy attorney general who was overseeing the Russia inquiry, is expected to leave after a new attorney general is confirmed.  https://t.co/DWV8sFKZ2h — The New York Times (@nytimes)  January 9, 2019 Rod J. Rosenstein, the deputy attorney general who had been overseeing the Russia investigation, is expected to leave the Justice Department after President Trump’s choice to run the department is confirmed, according to two administration officials. Mr. Rosenstein has been a central figure in the Russia investigation into election interference in 2016 — both by appointing a special counsel to take over the inquiry and for becoming a target of the president’s rage. He had always consid
Post a Comment
Read more
More posts