Showing posts with the label Bangladesh
Show all

At least 70 people die in Fire in Dhaka, Bangladesh 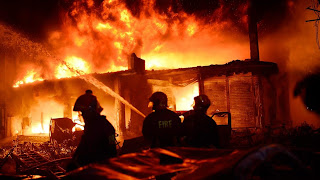 DHAKA, Bangladesh (AP) — A devastating fire raced through densely packed buildings in a centuries-old shopping district in  Bangladesh 's capital, killing at least 70 people, officials and witnesses said Thursday. The fire in Dhaka's Chawkbazar area was mostly under control after more than 10 hours of frantic firefighting efforts. Some of the about 50 people injured were critically burned. The district dating to the Mughal era, 400 years ago, is crammed with buildings separated by narrow alleys, with residences commonly above shops, restaurants or warehouses on the ground floors. The blaze started late Wednesday night in one building but quickly spread to others, fire department Director General Brig. Gen. Ali Ahmed said. Many of the victims trapped inside the buildings, said Mahfuz Riben, a control room official of the Fire Service and Civil Defense in Dhaka. "Our teams are working there but many of the recovered bodies are beyond recognition. Our people are u
Post a Comment
Read more
More posts