Showing posts with the label Chelsea Manning
Show all

Bradley/Chelsea Manning jailed for refusing to testify about WikiLeaks 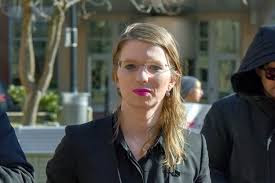 The former U.S. Army intelligence analyst was originally sentenced to 35 years in prison, but her sentence was commuted by President Obama in 2017 after she spent seven years behind bars. She’s back in federal custody today for refusing to testify before a grand jury in Virginia looking into the release of documents from WikiLeaks. This judge, who apparently isn’t messing around, denied a request to confine him at home because of his ‘medical needs’, saying the US Marshals could take care of it. Here’s more: AP  – Former Army intelligence analyst Chelsea Manning has been jailed for refusing to testify to a grand jury investigating Wikileaks. U.S. District Judge Claude Hilton ordered Manning to jail Friday after a brief hearing in which Manning confirmed she has no intention of testifying. She told the judge she “will accept whatever you bring upon me.” Manning has said she objects to the secrecy of the grand jury process, and that she already revealed everything she k
Post a Comment
Read more
More posts