Showing posts with the label Terry Crews
Show all

Actor Terry Crews has come under fire for tweeting that he wants to 'unite people' regardless of race, creed or ideology 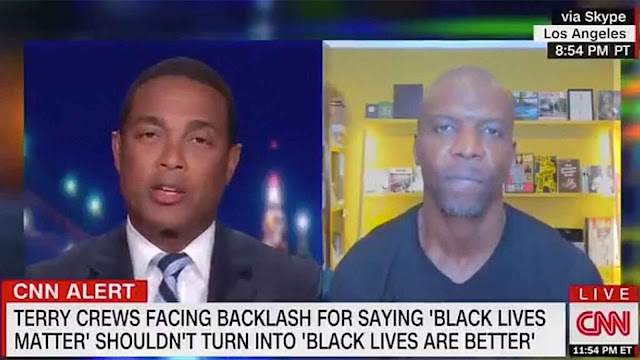 Last night Terry Crews was on with CNN’s Don Lemon to discuss a tweet he posted saying that Black Lives Matter needs to make sure it doesn’t morph into Black Lives Better. Apparently Crews took a lot of heat for that tweet (which I couldn’t find) and responded with this one: Are all white people bad? No. Are all black people good? No. Knowing this reality- I stand on my decision to unite with good people, no matter the race, creed or ideology. Given the number of threats against this decision- I also decide to die on this hill. — terry crews (@terrycrews) July 4, 2020 CNN host  Don Lemon  lectured actor  Terry Crews  on Monday night about the meaning of the Black Lives Matter movement, insisting during an intense conversation that it’s about police brutality and has nothing to do with Black-on-Black gun violence. Crews has come under fire for recent tweets noting that he wants to “unite people” regardless of race, creed or ideology, saying he doesn’t want the Black Liv
Post a Comment
Read more
More posts