Pres. Trump is expected to sign an executive order targeting social media companies after Twitter added fact-checks to two of the his tweets 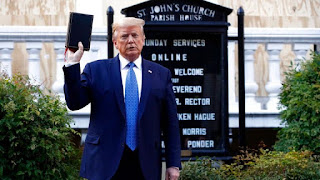 Meghan McCain  argued on Thursday that both President Trump and  Twitter  were "virtue signaling" and engaging in "kabuki theater" to appease their respective bases. "I think all of this is kabuki theater on the parts of the tech companies and on President Trump," she said, "and I think they’re all virtue signaling to each other’s bases and audiences, and I think this is a complete waste of time especially with 100,000 deaths [from  coronavirus  in the U.S.] right now." Her comments came after Trump castigated Twitter for including a fact-check below two of his tweets about mail-in voting Tuesday. McCain also suggested that the social media giant was going down a ridiculous path of fact-checking individual posts. "The idea that [Twitter CEO] Jack Dorsey is neutral or an unbiased person in all of this just isn't rational," she said. "And that's fine. Every CEO of every private company is free to have whatever po
Post a Comment
Read more
More posts