CNN media analyst on Kimmel interview: Biden could use 'exposure' that isn't 'too challenging' for him

During a Wednesday discussion about President Biden's upcoming interview with late night host Jimmy Kimmel, CNN media analyst Bill Carter said that the president could use some "exposure that may not be too, you know, challenging for him."

"New Day" host Brianna Keilar asked Carter what he thought the president was "hoping to achieve" in appearing on a late night show while suffering from low approval ratings. The president is set to join Jimmy Kimmel on Wednesday for his first major interview in over 100 days.

"Clearly this is an appearance meant to, you know, give him a forum where he can be relaxed and maybe have some laughs and joke around, and you know it will be a positive thing for him," Carter said.

"I think Biden could use a little bit of exposure that may not be too, you know, challenging for him. Although I would expect that Jimmy Kimmel, who is certainly a guy he expects to be sympathetic, will probably, you know, find some questions to ask him that were kind of serious questions because that's expected of him," Carter continued.

Carter said that former President Donald Trump didn't appear on any late night shows while in office and rather went after the shows like they were "committing treason." 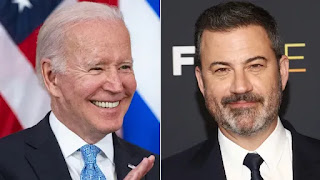 Carter said Obama was a "coveted guest" on the late night programs. "Biden has not really done that and I think, you know, his advisers have been looking for ways to get him out there and to have him be more public and this is certainly a way to do it," the CNN media analyst said.

He told Keilar and co-host John Berman that Kimmel told him that the president had always had an "open invitation" to come on the show in Los Angeles. He said he didn't think it was some "let's get a strategy together type of thing."

Carter also said that it was a decision based on the fact the president was going to be in LA for the Summit of the Americas and Kimmel's open invitation. A Politico report from 2021 called out the president's lack of media appearances in their "West Wing Playbook."

The president has been criticized throughout his time in office for his lack of direct media access. His last major network interview was on Feb. 10 with NBC's Lester Holt.

The Associated Press knocked Biden in January and noted that the president has done considerably less media interviews than any of his five predecessors.

Other critics said the president might be better in a one-on-one scenario with a reporter. A network reporter told Fox News in April that the president could stand to do more one-on-one interviews.

"I would send him to the southern border, to New York City to drive around in a cop car with [Mayor Eric] Adams, send him to a grocery store to talk to a family about inflation. I would put him out that way and then let him do interviews, one-on-one on local channels, in the 25 or 30 districts that matter. The national debate doesn’t matter in congressional races. What matters at the end of the day is he helping people in the swing districts win or lose," he said.