Showing posts with the label Scott Jennings
Show all 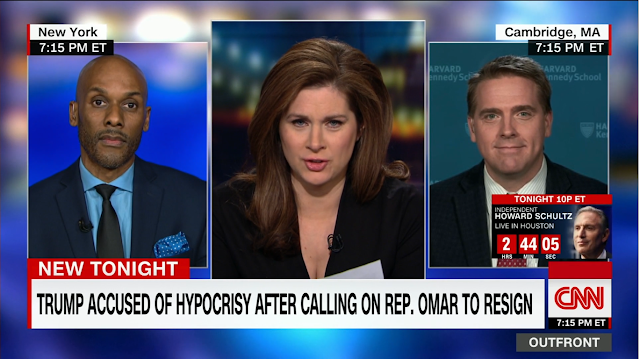 Erin Burnett and liberal pundit Keith Boykin tried to equate the anti-Semitic tweets from Rep. Ilhan Omar, D-Minn., and President Trump’s rhetoric -- and conservative commentator Scott Jennings weighed in. On Tuesday, Trump called on Omar to resign from Congress after she issued what he called a “lame” apology for her tweets that suggested Jewish groups such as the American Israel Public Affairs Committee (AIPAC) paid for Republican support. See Also:   Bob Menendez suggests that illegal aliens who have been convicted on DUI charges should not be thought of as criminals and should not face jail time Burnett began the panel by asking Boykin if he thought that Trump’s demand for her resignation was “hypocritical” -- he did -- and accused the president of having a “history of anti-Semitism,” pointing to Trump remarks from the 1990s where he once reportedly said he wanted “short guys wearing yarmulkes” to be counting his money. Also referenced: remarks he made to the Republican
Post a Comment
Read more
More posts