Showing posts with the label Steve Scalise
Show all 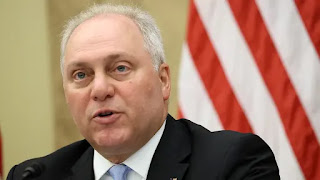 House Minority Whip Steve Scalise made a predictable case against new gun laws on Fox News yesterday morning, but the Louisiana Republican added a little something extra to his usual talking points. The far-right congressman — who’d become the House majority leader in a Republican-led chamber — noted that some instances of gun violence have been prevented by those close to would-be shooters reporting them before people got hurt. "We need to be focused more on stopping things before they happen,” Scalise argued. At face value, that’s a sentiment that may seem relatively easy to endorse. In fact, preventing mass shootings seems like the sort of goal that should generate near-universal support. The tricky part, of course, is figuring how to do that. We could stop mass shootings “before they happen” by limiting access to deadly weapons, but Scalise and his cohorts are against that. We could also stop mass shootings “before they happen” by making use of time machines an
Post a Comment
Read more
More posts