Showing posts with the label Tulsi Gabbard
Show all 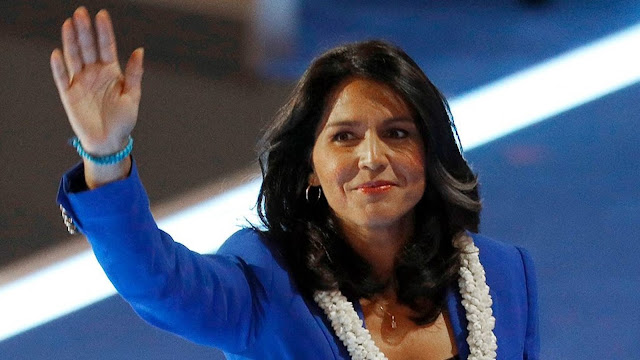 "There are a lot of reasons for me to make this decision,” Gabbard  told CNN . “There are a lot of challenges that are facing the American people that I'm concerned about and that I want to help solve.” Video: But,  her have some propblem: “Tulsi Gabbard has an even bigger problem than her lack of experience – it’s that she has no base of support,” Republican National Committee spokesman Michael Ahrens said. “Liberals think she’s too conservative, conservatives think she’s too liberal, and just about everyone thinks her coziness with Bashar al-Assad is disturbing.” Well, I’ll tell you one guy who will vote for her – her best pal, Assad: Not everyone is happy that she sucked face with Assad however: Tulsi Gabbard’s disturbing and singular denialism of Assad’s role in the brutal butchering of his own people, obliging a meeting with him and spreading his propaganda should be disqualifying.  S.E. Cupp Oh well, S.E. Cupp wasn’t going to vote for Gabbard
1 comment
Read more
More posts