Showing posts with the label Dog
Show all 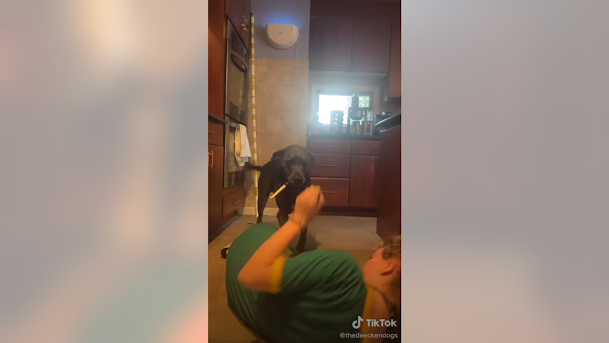 A   dog trainer   decided to test her pooch’s lifesaving skills by pretending to choke, but she didn’t expect him to try and solve her dilemma with a knife. The moment, which was captured in a  viral  TikTok video by  The Deecken Dogs , shows dog owner Haley Deecken and her valiant pet, Dunkin, reacting to the situations that were dealt to them. Deecken captioned the 41-second clip with: "Why he whip it out like that." The clip shows Deecken feign a choke and drop to the floor as she tries to convince Dunkin that something is wrong. Dunkin walks over to Deecken and briefly investigates the situation with inquisitive sniffs, licks and paw taps. When Deecken fails to react to his checkup, Dunkin turns around and grabs a knife from behind a  kitchen  counter with his mouth. Deecken jumps up to avoid the knife-wielding dog, who continues to circle around her. She eventually retrieves the knife from Dunkin after she evades his circling. The video has gotten 16.9 million views
Post a Comment
Read more
More posts