Showing posts with the label Monica Lewinsky
Show all

Speaking with Monica Lewinsky about the HBO series she produced about Bill Clinton's impeachment, CNN's Jake Tapper actually disclosed having dated Lewinski in the past. "Yes, I have to disclose, full disclosure, in tonight's episode our G-rated date from December 1997." 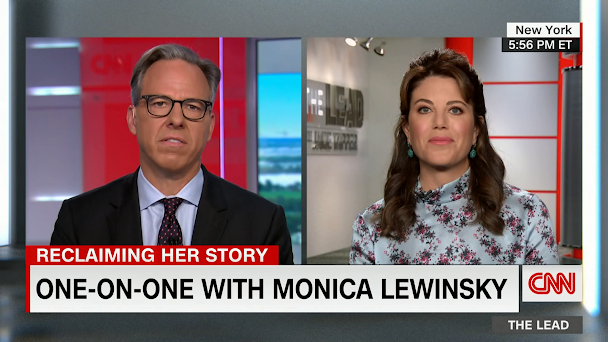 CNN anchor Jake Tapper awkwardly disclosed to his viewers of the "G-rated" date he had with Monica Lewinsky, which was depicted in the FX series about the impeachment of President Bill Clinton.  During an interview on Tuesday, Tapper plugged Lewinsky's HBO Max documentary "15 Minutes of Shame" and "Impeachment: American Crime Story," both of which she produced.  "First of all, Monica, yes, I have to disclose, full disclosure, in tonight's episode our G-rated date from December 1997," Tapper began. "Our one date," Lewinsky playfully stressed. "Our one date from 1997 is portrayed, I should note, by an actor way better looking than me now or then," Tapper added.  Hours later, the fifth episode in the "Impeachment" series aired, which began with Tapper's 1997 encounter with Lewinsky.  The scene shows Tapper, played by actor Chris Riggi, sitting at a bar with a friend at a D.C. Mexican restaurant and quic
Post a Comment
Read more
More posts